Posted November 5, 2008 by Sarah under Craft

I don’t believe it!  I’ve got another cold!  I was hoping that last one would be my one and only cold of the season, especially with me getting it out of the way nice and early!  I’ve been a good girl too and wrapped up nice and warm this autumn so far!

I started with a headache last Thursday and have gone downhill since then, Saturday I felt much worse but still managed to drag myself to the dry point etching workshop I had booked on.  I know it was free but I really wanted to go so I went.  Since Sunday I have basically done nothing but snooze and sneeze.  I keep feeling really sick too so I haven’t been eating much.  I’m on my strictly white food diet, toast, crisps, grapes, potatoes and cauliflower.  Is that a bit weird?

Anyway, on to more interesting things.  I really wanted to take some pictures at the etching workshop but I totally forgot, I guess I was having too much fun.  I can’t share the finished prints with you either because they are still in the printers studio drying out under a heavy blotting pad.

This is what I did though.  Firstly we did some monoprints based on some tracings of leaves that the Neil (the artist) had, that was really fun although I kept pressing on too hard and most of my lines came out very thick.  Basically we did rubbings of leaves through some thin paper then we used that rubbing to trace over the lines with a sharp pencil on to inks that were rolled out on shiny etching heat plates.  That took most of the morning and then after lunch we moved on to etching.

Basically we were etching from a piece of plastic which made it nice and easy.  I did a composition of leaves and we practiced very light and heavy marks in the plastic, trying to get a nice mix of the two to give some differences in the print.  Once we had our plate we then inked it up.  First you squeeze the black ink into the plate then you rub it in with a cloth and then you use another piece to buff it up so that ink is only in the lines you’ve made.  From that I couldn’t believe that it would make a print but I was forgetting about the huge press we were about to use!  We then laid some tissue paper down on the bed of the press with our plate on top then a piece of paper on that.  On the top goes a small pile of soft wool blankets.  Then for the hard work, you have to turn the handle to feed the plate under the roller and out the other end, it really is very difficult, especially when you are actually going over the print.

Again sorry for not having any pictures to show you, it really would make the telling more interesting. When I pick my prints up I’ll scan them and show you the results!

For the other exciting news this week, I’ve bought an overlocker!  I’ve been meaning to buy one for months, the plan was to ask for money for my birthday which is in a couple of weeks.  I’ve bought one a little earlier because I need it for a specific project I’m doing at the moment.  Now I just have to resist the temptation to not spend all my birthday money instead of putting it back in my bank account!

This is what I bought: 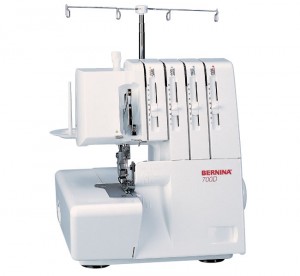 It’s a Bernina 4 thread over-locker, model 700D.  So far I’m really happy with it, although I haven’t had a proper chance to play with it due to the annoying poorly-ness.  I’ve been researching over-lockers on the internet, reading reviews and trying to decide which one to buy, it really was completely baffling!

I really liked the look of the Babylock machines.  I’m an avid reader of the U-Handbag blog and Lisa had bought a Babylock Imagine Wave, a really lovely looking machine.  I did like the features but I was a little suspicious of the air threading system, I was a little worried that something as complicated as that might be a bit difficult to fix if it went wrong, I’m a good old fashioned girl at heart and was sure that I could learn how to thread a machine (I hope anyway!).  I really liked the automatic tension feature too,  hate tension like any normal sewer so I saw a ray of light with this particular feature.

So I then switched my allegiance to the Elna machines.  I have a Janome sewing machine and am not particular happy with it mainly due to it’s noise so I was avoiding Janome’s, also I read a review of the 9200d that said it was difficult to thread.  At this point my head was about to explode with too much choice! I had it narrowed down to three machines, the Frister Rossman Knitlock, the Elna 654 and the Elna 745. I had read lots of good things about the Frister being a good make and a solid machine, the Elna 654 seemed easy to thread and the top model Elna had automatic tension and cover stitch.  I was also willing to spend a little more but at £650 the top model Elna was really at the top of my range, after all, some savings were going in to the machine and I needed to spend it wisely!

Hubby had been here through the whole decision process so he knew as much about these machines as I did!  In the end I really wanted to get a machine from our local shop, Woodseats Sewing Machines. I go there for anything to do with my machine and trust their advice.  So yesterday afternoon hubby popped up there for some advice, armed with a cash card and a mobile phone!

Basically he was told that the top range Elna was ok but that the automatic tensioning wasn’t really worth paying extra, that they could help me with my tension on whatever machine I bought.  That scores brownie points straight away, always trust a company that steer you away from a more expensive machine!  Then when we asked if they could get the cheaper Elna in we were told that there were better machines for that mid range price, which was around £300, they recommended the Bernina.  Now, we all know the Bernina’s are good machines, I always hoped to trade my Janome in for a decent Bernina when I had the cash and now it looked like my first Bernina would be an over-locker!  Hubby asked about the 800DL Bernina model but we were advised that there wasn’t much difference between that and the 700D and that this model would do everything I needed and it was a good sturdy yet quiet and fast machine.  So that’s how we ended up with a Bernina!  I just wish I wasn’t so poorly or I would have liked to go up myself, like I said though, Hubby knew as much as I did about Over-lockers and I trusted his judgement.  I just wish that I was well enough to play with it, I managed a bit of sewing on it yesterday before I felt woozy again and had to sit down.  Now it’s just sat there in the corner looking lonely, I will hopefully be sewing like a fiend soon and I’ll show you the results I promise.  In fact I left a huge pile of knitting bag panels that need sewing up because I knew my new over-locker would make short work of them!

New little projects on the go…

Stuck in bed with the wifi…

oooh pretty lovely shiny new overlocker you have there missis. Good choice by the looks of it. :-)
Sorry to hear you’ve fell prey to the nasty cold monster again. Hope you feel better really soon so you can play with your new toy.
Zoë xx

I have the same overlocker (800DL version) and can really recommend it. I’ve been using mine for over a year now and haven’t had any problems with it, I find it really quiet too.
There’s so many bugs going round at the moment, it’s difficult to escape them – hope you feel better soon.