Well I made it to the Sheffield Vintage Fashion Fair!  I felt really poorly when I woke up yesterday morning but I was determined that shoveling paracetamol down my throat would ease the cold enough for me to be able to go to the fair! Most of the day I felt fine although I did go downhill quite quickly after 4pm.  I hung on in there though and really enjoyed the event.

Here is my half of the stall: 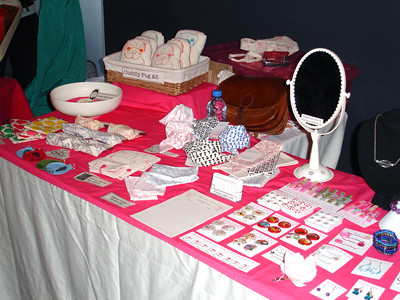 Yvonne’s half (sorry it’s such a dark pic but the club was painted black!): 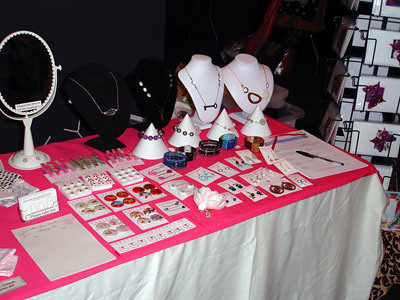 Kati was the only one willing to have her picture take, here she is looking gorgeous in her ‘famous’ strawberry dress posing next to her lovely cards:

The fair was lots of fun, it’s great to do a city centre event because it’s totally different than one out in the subburbs.  There was also a great turn out, people were actually queueing up to get in and then kept having to limit the number of people allowed in because it was getting really busy. 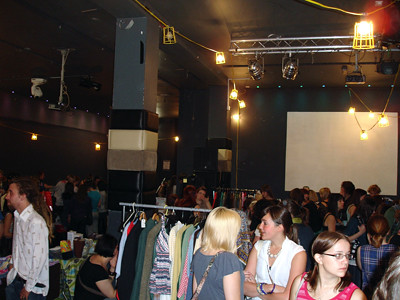 There were lots of great stalls, mainly vintage but then a few other craft stalls and 2 or 3 stalls selling food including Amanda’s Fancie cupcakes, we all went home with a bag of cupcakes and polished off about 3 each whilst we were there.  I wanted to take a picture of the cupcakes but they were gone too quickly! There were so many nice clothes but I really tried not to have too close a look as I knew I’d end up spending all the money that I made.

The bar was open too but the place was that full that I never actually made it that far: 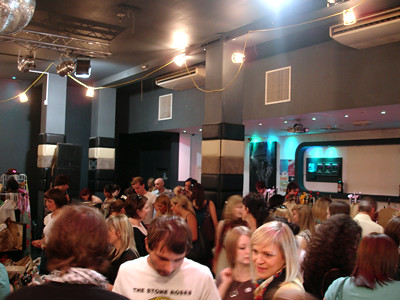 I took my new bags down but will have to think of a better way of disaplaying them I think.  Hubby is working on some kind of hangy-thing (techinical term!). 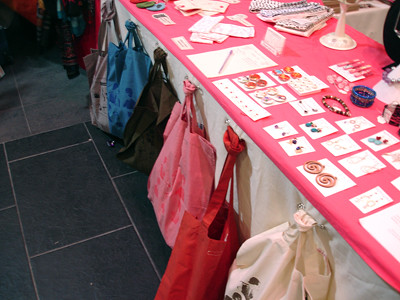 The picture is a little blurred, I forgot mine so all of these pictures were taken on Yvonne’s camera.  I’m not very good at learning new technology very quickly.

Today I feel a lot worse though, very snotty and sleepy.  Most of the day I’ve been asleep on the sofa so now I’ve decided to get off my lazy arse and do some blogging.  Don’t you hate being ill?  The worse thing about it is that it puts me off my food!  The girls were going home for takeaways last night and so that’s what’s keeping me going this weekend, get better and I can have a chinese!

A day out in Manchester…