We have an interesting cubby hole in our studio which has now found a second use.  The inside of the cubby hole is Owen’s space where his machinery will eventually live, this is so we can keep our studio dust and muck free.  The original use was the opposite interestingly enough, it was built as a clean room to house computer equipment for the woodworker who used to have our studio.  We have now given it’s roof a second use as our mini photography studio.  Let me assure you, it is a sturdy box and incredibly well-built so there will be no falling through the ceiling, but to minimise the risk of falling off the top, we are going to build a bit of a banister so we don’t get carried away taking photos and accidentally back off the edge.

Our studio has plenty of light as it has windows in the front and also in the roof, but the windows are very high up which doesn’t give the best photography conditions.  We missed the spot we had in our old studio where we could take photos right next to the windows where the light was just right so we wanted to re-create that.

As you can see from this Panorama we took the day we moved in, the top of the cubby hole gets a lot of light. 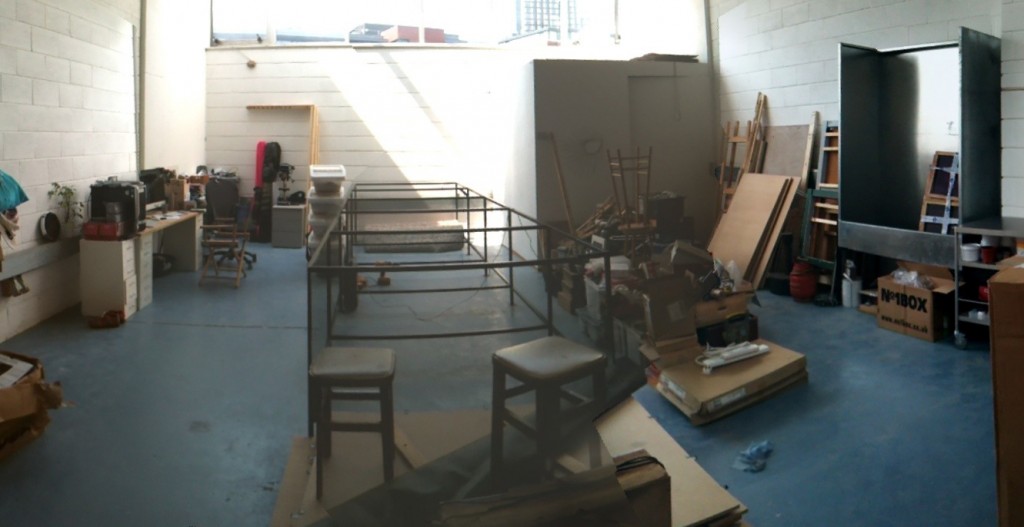 With a limited budget we had to build our set on the cheap.  We found a wooden base which was going free in our building and we used some leftover printing table mdf offcuts for the top, this gave us a makeshift table to put against the wall. 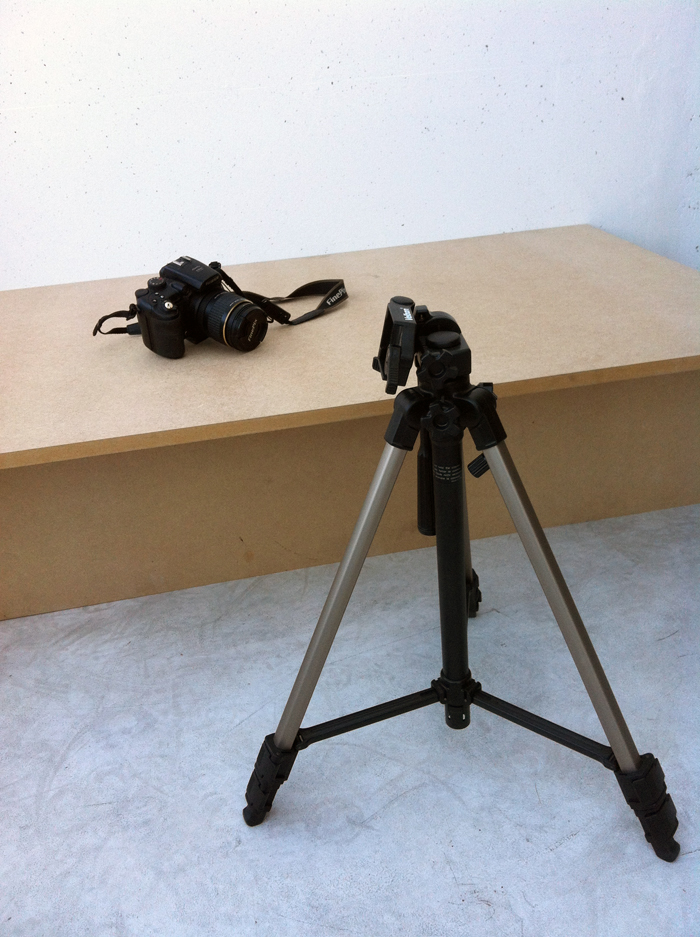 On top of that we have draped some white wrapping paper which we picked up for £10 including postage, now this might sound expensive but it is a 10m roll so will come in very handy.  Everything we’ve read about the best backdrop suggests a lightly draped smooth paper surface which goes from the wall behind and smooths under the object.  This is going to be our white backdrop set. 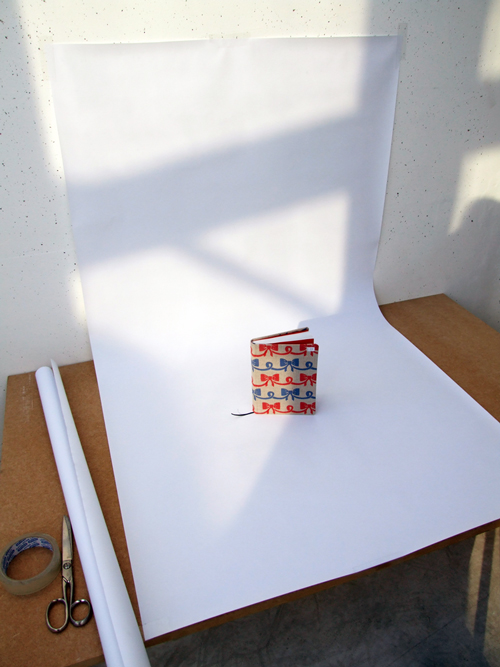 Here is a quick shot using the new set up, I’m so happy with this new backdrop, it’s now seamless behind the item and creates a nice smooth surface.  As you can see from the photo, we have some shadows of the window frame and the book itself which are formed by the hard light shining directly through the window, hard light is any light source that isn’t diffused such as a lamp or direct sun shining directly on the set.  This photo has been taken at 1:30pm in the afternoon with the sun opposite the building. 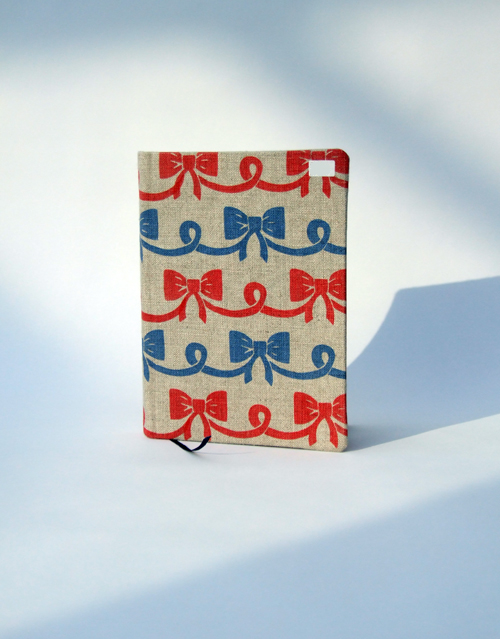 This next picture was taken at 2:54pm when the sun had gone behind clouds and so therefore acted as a diffuser, you can see the difference the soft light makes to the photograph.  Both photos have had exactly the same treatment in Photoshop. 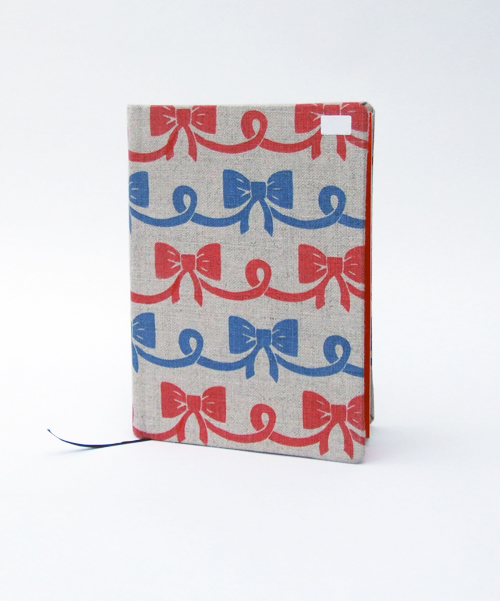 The White backdrop can also be exchanged for the home backdrop.  The background is made from various wallpaper samples we have (always grab a sample when you can as these come in so handy).  The only base we have at the moment for taking photos of the lampshades is one of the Ercol pebble tables which seems to be permanently living in the studio and leaving the other two rather lonely at home.  We have a few other props in the studio which can be added over time, such as a curtain pole for hanging fabric, a wicker chair for photographing cushions and a footstool with exchangeable tops to show a variety of fabrics. 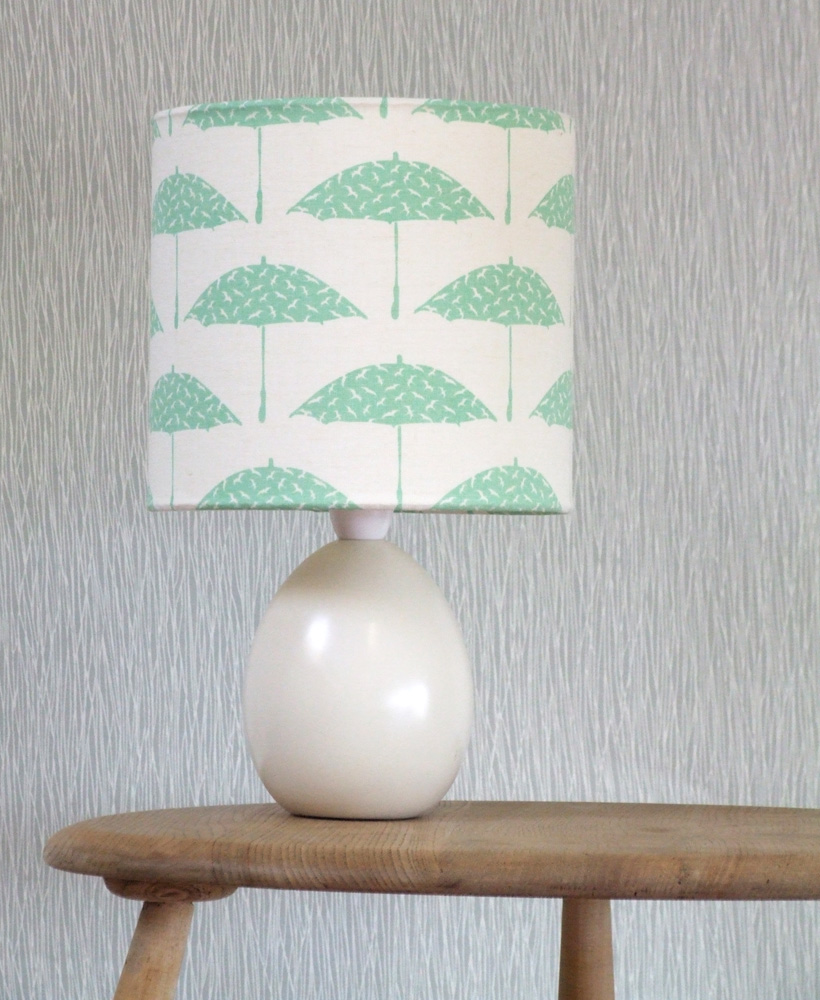 The best way we could think of getting up there was to buy a set of loft ladders, that was the most expensive purchase of the project but definitely worth it as they easily store back on top of the cubby when not in use. 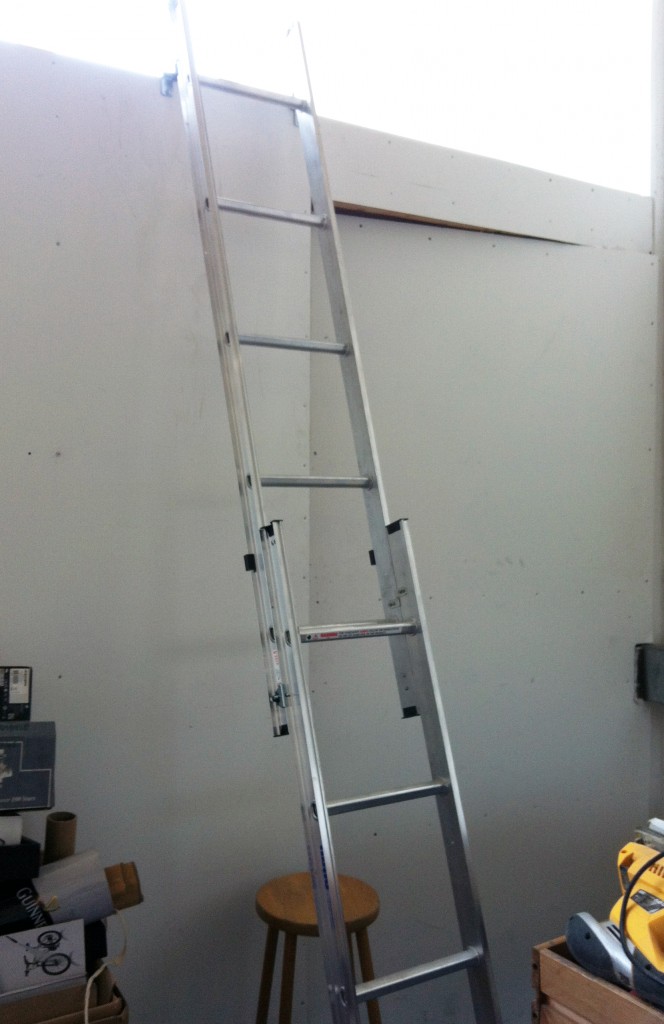 I look forward to taking many photographs up on the cubby and in the summer we might even use it as somewhere to go and sit, it’ll be lovely to be up there in the sun.  For very sunny days we’re going to have to take photos when the sun is behind the building or add a diffuser directly onto the window.  Hopefully over time we’ll be able to add more props for this area and get even better at taking our own photographs.