I had a tour of some new studio spaces today, I’d been really looking forward to this all week!  I don’t need to moan on again about my troublesome attic and it’s lack of a sink do I?  You all know how annoying I find it, well, this was my little glimpse at a solution.  I’ve been on the waiting list for Persistence Works for a while but haven’t got much chance of getting a studio, these new studios are going to be called Porter Brook Studios and they are a 2 year temporary scheme set up by Yorkshire Artspace using an old council building adjacent to Persistence Works called the AVEC building. 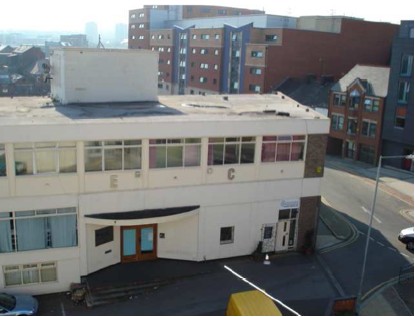 This is the view of the new studios from Persistence Works stairwell – it’s an old office building but doesn’t feel too like an office really.  I recently had a look at some studios at Bank Street Arts and they really did feel like offices but these studios have a nicer feel to them.  There were only two studios with a sink and one of them was far too small, the other was perfect, a long room which would fit my very large printing table in it.  At the moment it’s only got a small sink in it but it’s going to be replaced with an industrial sink.  The studio I really like is the one above the ‘dot’ to the far left of the picture – it has a lovely view of persistence works too, is nice and light and has a high ceiling – it’s perfect really!  So now I have to get in line behind the other more experienced and no doubt more prestigious artists and makers.  Part of me thinks that I shouldn’t go and look at places just to raise my hopes and then have them dashed but if I never went I’m sure I’d feel worse!

Hubby ran across to his studio in Persistence works to get a tape measure so we could see how big it was – I could see him run up the stairwell from the window of the studio – he said that we could wave to each other, in an ideal world it would be great – I can dream can’t I!

Yes, I look a little different!