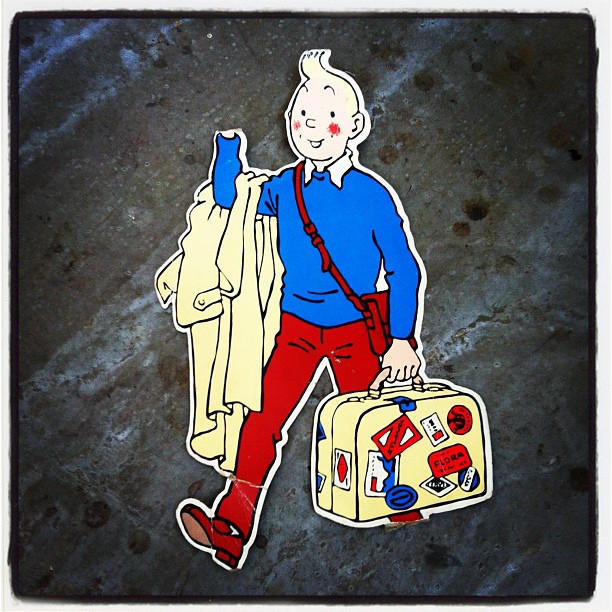 The new Tintin film has been released on DVD this week and I was quick to download it on iTunes as soon as I possibly could. I hoped that the experience wouldn’t be disappointing in comparison to seeing it on the big screen and it wasn’t. I know the film hasn’t gone down well with a huge number of die hard Tintin fans but I don’t agree, and I am one of those fans.
I still have all my Tintin books from childhood and I can safely say they were my favourite and most read books, in fact you only have to look at my stash to see which particular adventure was my favourite, the rather dog eared Explorers on the Moon. I not only collected the books but anything Tintin related and I have notebooks full of drawings I did of all my favourite characters. (in fact I still drink out of a Tintin mug and eat from my Snowy bowl!)

I’m a huge comic fan but Tintin was always my favourite so I was happy to see what Steven Spielberg and Peter Jackson had done by bringing Herge’s masterpieces to the big screen. Putting aside all Hollywood related issues such as the need for more ‘Indiana Jones’ style action, annoyance of ‘built for 3D’ and story changes I think the film is a great representation of the books. These are interpretations of treasured works, and not one something that people should be so keen to jump down the throat of. As a Tintin fan I believe anything that introduces the glory of Herge’s work to a whole new generation of fans is a great thing. My niece and nephew are now Tintin fans after seeing the film, they’ve been bought the tv series on DVD and when they are old enough to read the books I’ll have pleasure in buying them those too. It’s just another way into the material, it doesn’t replace it or degrade it. If the books were abandoned in favour of this or any future movies then I’d be the first to sit up and complain but there is too much respect for the material for that ever to happen.

One thing that delights me about these kind of interpretations is the fact that new art is brought with them such as the brilliant John Williams score and dazzling opening animation sequence. John Williams shines as he always does, with this kind of childhood adventure story but the opening sequence was simply a delight. Did you do what I did and try to spot all the references to characters and places from the novel? It’s a joy to watch, and because it contrasts so starkly with the style of the movie itself it feels like a great opener which fulfills the wishes of even the most die hard of fans.

Here is a great little video which is an alternative to the official opening sequence, this was done by Tintin fan and graphic designer James Curran.

The Adventures of Tintin from James Curran on Vimeo.

You can read a fab interview with James here. This has given me a great idea for a whole fanfiction related post, there are some brilliant Tintin related works of art out there.

Time for a giveaway

and the famous siengr was in there but Caculus wasn’t.I would like to see The Caculus Affair mixed with the broken ear or Tintin and the Congo and Tin tin in America.