Well, sorry for the delayed post when it’s been a week since I visited the Knitting and Stitching show but silly me has been doing lots of shifts at work and hardly had a moment to myself!

My first disappointment when we went to the show was the fact that I took my little digital camera and the memory card had an error and wouldn’t take any pictures!  I was devastated!  We went on the train to Birmingham and found it relatively quiet at the show, nothing like the Harrogate one.  It did pick up a little but things weren’t particularly hectic.  There were a few moments though when I thought some of the ladies there would have happily run me down in order to get to the fantastic fabric and wool on show!  I did get a little elbowed at times!

The first thing we saw when we went in to the hall was the Hyperbolic Coral Reef, there are some pictures here on the Crafts Council website.  It was really good, some of the colours and patterns were lovely, strangely enough, I think parts of it would suit a really lovely scarf!

There were so many great exhibition stalls, again I wish I could show you some nice pics but a lot of them were student exhibition stalls so I probably wouldn’t have taken pictures of those anyway.  We had several laps before we decided where we wanted to go back to, the general idea was to concentrate on the buying first so we could really absorb the exhitions later so that’s what we did.  Here is what I bought: 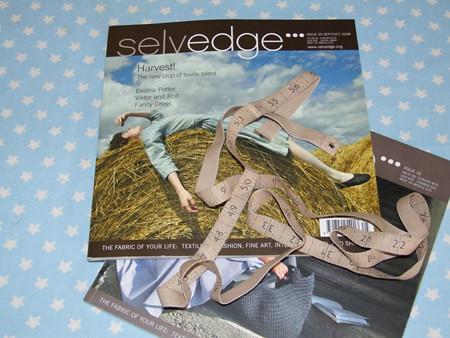 I renewed my subscription to Selvedge magazine, I stopped it about 2 years ago because I just couldn’t afford it anymore.  It is a lovely magazine but it’s a little pricey at the normal price of £45 a year.  I decided though that it’s worth spending a little business money because it really it the best textiles magazine out there.  At the Selvedge stall there were also selling East of India products, I bought a lovely fabric tape measure which you can see sprawled over my magazines. 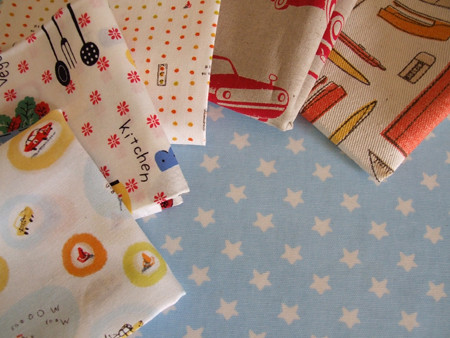 Here are some lovely fabrics I bought.  They were on offer if you bought 4 fat quarters so me and my friend Helen bought 8 between us to save a bit of cash!  These are all Japanese fabrics and some of them are quite thick cotton with a lovely weave which would be great for tea towels.  The car and stationery prints (to the far right) are going to be made into floor cushion covers. 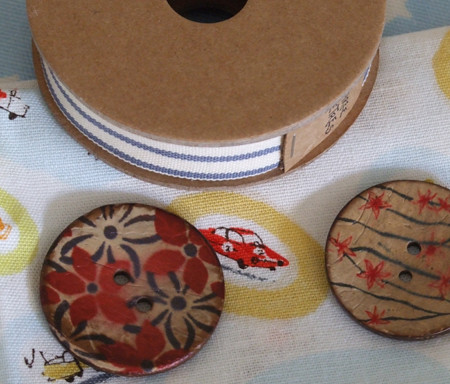 I also succumbed to some buttons and another East of India purchase of some cotton ribbon tape. I thought it’d be great to sew round the edge of plain tea towels to make them a little more exciting!  The buttons are made from coconut and are painted so beautifully I just had to have two!

I had a lovely day out in Birmingham although there were several stalls which are normally at the Harrogate show who weren’t at Birmingham.  I’m not sure whether to go back to visiting the Harrogate version next year, I just wish it was a nicer venue than it is, the NEC is definitely a better place to hold the show.  It was also nice because everything was together in one hall rather than split into several like it is at Harrogate.

Want to be a fan?