Well, I felt pretty crappy at work yesterday but that’s nothing compared to today!!  I had to phone in sick which I hate doing!  I kept thinking that I’d be ok if I just got up, got showered and dressed and got the bus to work for a change – after all, I was only doing a 4 hour shift!  But no, my cold had other ideas.  I did get as far as the dressed and showered bit but felt all dizzy after standing up too long and my ears are ringing like mad.  Poor me.  So I’m feeling really sorry for myself today and even worse – I’ve been snoozing all day and haven’t felt well enough to knit!!!! Yes, it’s that bad!  The dogs have been great though and really looked after me.  I was worried they would both be pains in the neck all day because hubby has been out at a conference so it’s been me on my own with them which isn’t much fun when you’re poorly and you have 2 young dogs that want to play!But here is a picture of their cuteness today… sorry about the grainy picture – inside with the curtains shut and no flash so doesn’t work! Don’t blame me – I’m ill! 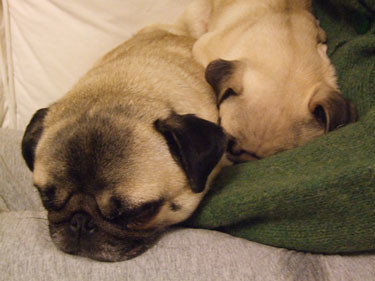 The only thing that is on my mind now though is the trip to  York tomorrow to meet my old uni chum.  We’ve had the trip planned for a few months and now the timing couldn’t be any worse.  I’ve left her know that I’m feeling crappy just in case I have to cancel tomorrow morning but I really don’t want to do that because I only get to see Helen about once a year.  But I also don’t want to be wandering around York feeling like crap!  I just keep hoping that it’s only a 2 day cold and that tomorrow I’ll start feeling tonnes better – please cross your fingers for me!

p.s I also don’t want to leave the house looking like rudolf the red nosed reindeer! So ultra balm tissues at the ready!

Feeling a little blue, in need of knitting therapy…