Posted October 11, 2008 by Sarah under Sustainability

Well, this week has definitely been a tough week so now it’s the weekend I’m so happy. I’ve got this weekend off so today has been all about catching up with boring things like washing and tidying.

I had an exciting new delivery yesterday though, my new packaging! Isn’t it amazing the things you get excited about. Until now I’ve been using jiffy bags to send out anything I sell but for the textiles the jiffy’s are a little small so I’ve ended up going out and buying bigger ones which are about 90p each which is far too expensive. I found a great company online though that sell plastic envelopes which are fully biodegradable which really fits in with my wish to not be wasteful or harmful to the environment. I always thought it was a shame that the things I make are as eco friendly as I can make them and then I send them out in a jiffy bag which you hope someone will reuse but will eventually end up on a land fill and be around FOREVER! Isn’t that strange to get your head around that, that something I throw away will be around long after I’m dead and buried. Or is that too morbid? Sorry, I think my mind has been dwelling on slightly sadder things this week as it always does when you lose someone.

So here they are: 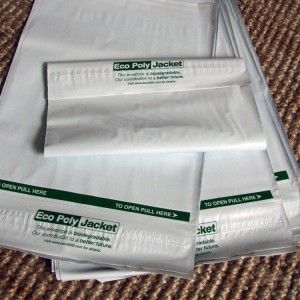 They are really quite thick as well, I guess we’re so used to the thin degradable carrier bags that I expected them to be like that!  I wrap most of my textiles in tissue paper too so I’ll still be doing that because at least that can be recycled and now people can pop the packet in their compost heap (or reuse it!).  Hurrah!

I’ve had to buy them in bulk so I’m selling a few on my etsy shop too, not really to make a profit because I’m selling them at cost.  I just hope that this means that other people like me who want to use these kind of bags will be able to get hold of them a little easier!