Posted November 11, 2008 by Sarah under Printing

Today is a part printing day/part work day, I’m due at the library for a shift this afternoon but before I go out I have to print up some Christmas fabric, it’s a lovely linen blend and the texture is gorgeous!  I printed up some test pieces, here they are: 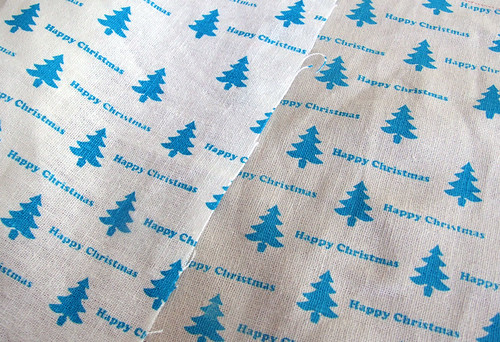 One is a grey/beige colour, the other a lovely crisp white which I decided was much more Christmassy so I’ve gone for that one.  This fabric when printed is going to be make in to some cute little pouches for the laser etched acrylic Christmas decorations I’m taking to Woodseats Fair this Saturday.  They look really sweet!  I have angels and snowflakes in two different sizes.  I was going to sell them separately but I’ve decided to sell them in pairs of one large and one small.  This has obviously cut number I have right down but they are just a small part of what I’m selling at the fair and I’ve really enjoyed making them so I don’t mind!  I’d rather sell out than be left with some!

After work tonight I’m off to a leaving do for one of our lovely library ladies who is off home down south so is leaving our lovely library.  Sniff sniff.  She’s chosen a great place for her leaving do though, Fired Arts at Banner Cross.  I’ve never been before but always wanted to.  The plan is to go down there, paint a pot, drink some wine we have still left over from Christmas, and eat some takeaway!  It should be a lovely evening and I will post some pictures of my finished beauties when I get them fired, I might do a mug for the hubby for Christmas!

Armistice Day.  We had the 2 minutes silence here in the UK to commemorate the end of the 1st World War. Has everyone been wearing their poppies?  At the ceremony in London there were the three surviving soldiers from the Great War, one of them is 112, isn’t that amazing?  I always try to make sure I keep the silence, even the puggies were quiet!  My grandfather grew up without his father because he was killed in the 1st World War, he was only 19 or 20 years old I think.  Such as waste, that’s what war is though isn’t it?