Phew, it’s all over!  I moved house on Friday and boy was it a palava?  Not only was it incredibly stressful and tiring but completely draining too.  I spent most of Friday and Saturday worrying about getting it all done before the transit van had to go back and worrying my dad was going to have a heart attack what with all the lifting!  I know I probably said this the last time but we aren’t moving again if we can help it and if we ABSOLUTELY HAVE to move then we’re hiring removal men!  We did 6 van loads with the transit over two days – the last at 10pm on the Friday night then starting again at 7am so that my dad could get the van back by 10am on the Saturday!

Anyway, it’s all done and most of the boxes are unpacked but I still can’t find my mobile phone charger!  I think it ran away, they say you always lose something in the move though don’t they?  My new house is much nicer, in a quieter and better neighbourhood and already the neighbours seem lovely!  My internet has been off since last Thursday though and was only put back on today so I’ve been having some serious internet withdrawal symptoms, seriously!  I’m happy now though and spent all afternoon responding to the mountain of emails, it’s all good fun though.

I got a nice surprise in one email, I got featured in another treasury: 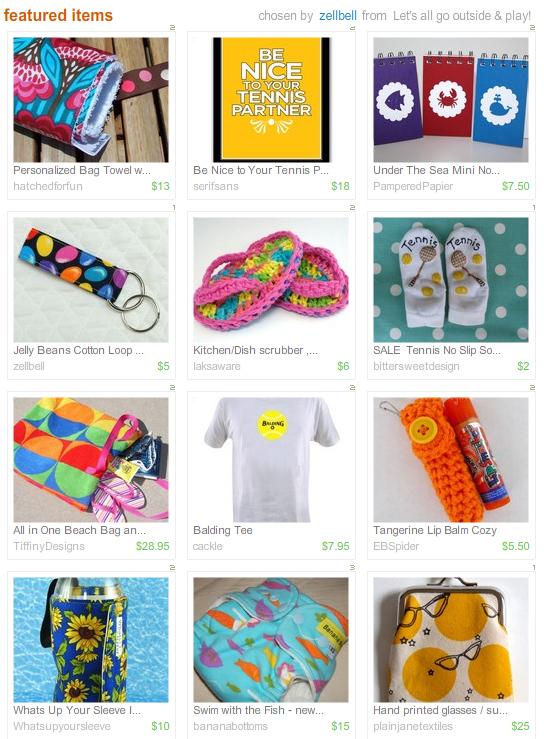 It’s a great treasury called Hot Fun in the Summertime, it was created by Zell Bell Designs so a big thanks to Anna!  I love it when my glasses cases get a little praise, in fact they seem to be one of my most publicity worthy items even if they’re not the most popular sales wise!  I think I’ll make that design one of the first I create when I start my printing fabric sideline.  Talking of which I’m getting closer to my dream as the wall came down in my studio today.  It’s been very delayed with some ‘official’ stuff but things are really moving now.  Whilst we had the van at the weekend we moved some of my larger items down to the studio as they wouldn’t fit in to my dad’s car.  Which means I’m without a printing table at the moment which is a little hard but I have a very teeny tiny table set up in my attic here at home as a temporary solution.  After all, I have 2 fairs over the next few weeks to prepare for!  I’m visiting the studio tomorrow so will try to remember to take the camera to show you the latest developments!  I’m back at work tomorrow though so my brain might not be completely focussed!

Why does tax have to be taxing?

Getting nearer to studio time…