I got 2 little parcels in the post the yesterday, one from Amazon and the other from a seller on Etsy.  How exciting!  The only problem is I can’t say what I got from Etsy because I bought two of the same thing, one for myself and another for my friend whose birthday it is in a few weeks.  I can’t risk posting a picture in case she comes on here – let’s just say, it’s lovely!!  We ordered a few books from Amazon, two for my father in law for his birthday, one for my friend Claire (who doesn’t read my blog) called Make Do and Mend.  It’s a perfect for her because she goes to 1940’s renenactments and collects vintage clothes from the era.

The book is full of instructions and helpful hints first published in the 40’s by the government.  This book collates it all together and it’s fascinating!

This was my last book in the package: 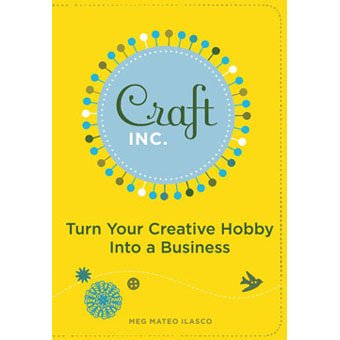 I’ve only read a bit so far but it’s good.  I do know a bit of what’s in the book already but it’s got quite a few helpful hints in it.  It is American though which means it’s got a few things not really relevant to someone in the UK but the majority of it is fine for anyone from any country.  I’d highly recommend it to anyone wanting to start their own business.

Well, today has been a totally unproductive day.  It’s my only day off since Wednesday and I haven’t got another day off until next Wednesday but I’m at the hospital for most of the morning so I’m not sure how much work I’ll get done.  I’m struggling to juggle my new hours with my new business at the moment.  I work less hours now but they are spread over more days so it splits my time up quite a lot.  Also because the hubby has lost his other job I’ve taken on a few more hours at work but it’s only going to make the situation worse.  I really need to get organised with my time because otherwise I’m going to end up doing what I did last week (getting up at 4am to expose screens) on a regular basis.  The good news is though that I’ve decided to invest in building a light box.  I’ve bought some striplights and the hubby has got some off cuts of wood from the studio.  We already had some board for the bottom of it so now hubby just needs to go to uni and buy a piece of acrylic.  The box is quite large and in total has cost just under £50 which is quite good I think. Pictures to follow soon!

The early bird gets the print…

Lit up and almost ready to go…